Cooling Tower Mechanical Services provides a complete repair and rebuild service 24 hours a day, 7 days a week, every day of the year.

In the case of repair, both normal and emergency services apply. Emergencies can be addressed quickly and efficiently because Cooling Tower Mechanical Services (CTMS)maintains a large inventory of parts, and flexibility in local manufacturing allows damaged components to be fabricated quickly.

Complete rebuild services are available for older towers which no longer measure up to current or projected requirements. With structurally sound towers, these can be “Energized” to provide the required capacity. A combination where adding new cells to match the external appearance of existing installation might also be feasible.

The replacement market is efficiently serviced by our delivery services. Genuine parts, or parts made to fit when the original manufacturer may have ceased trading can be made and shipped from our Brisbane factory.

Safety is the highest priority when we carry out any project. Fully trained and certified persons are used, thus ensuring quality work. We design, manufacture and install fully compliant access platforms and ladders, out of any material as requested. The serviceman is catered for.

For further details refer to the menu, or send us and email requesting catalogues or extracts from published technical brochures. 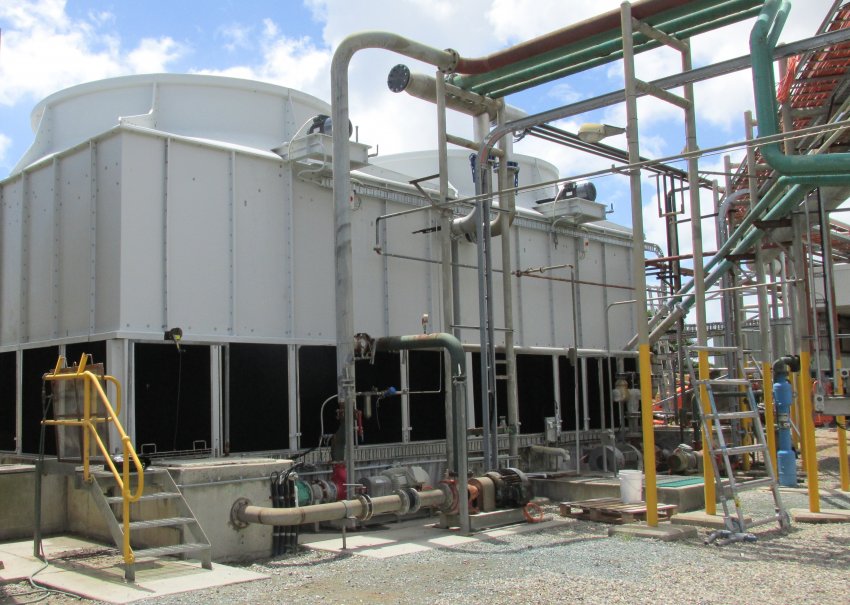 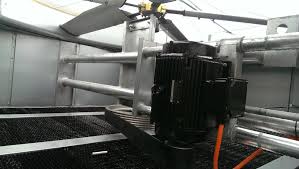 Programmed maintenance means that a scheduled shut down will need to be planned for all cooling equipment once every three months for approximately 4 hours and one every six months for 8 hours. This may vary depending on tower size and location.

This schedule has been designed to comply with the requirements of AS3666 Part 2 Operation and Maintenance. Only suitably trained personnel are authorised to carry out these works. This schedule does not cover the application of chemicals into the system for microbial control. A specialist water treatment company should be engaged to carry this out. 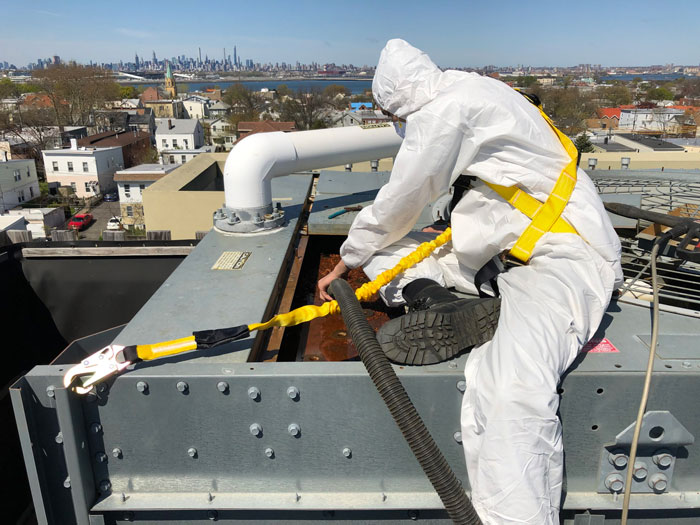 Velocity recovery fan stacks reduce the velocity pressure of the discharge air. By reducing velocity pressure and re-pitching the fans to deliver design air flow, fan horsepower can be reduced up to 25%. Conversely, more capacity can be obtained from an existing cooling tower with no increase in power consumption.

Because of the high heat transfer efficiency of waveformed PVC film fill versus wood splash bar fill, horsepower reductions of 20 to 40% often can be realized. Conversely, capacity increases in the range of 20% can be achieved with no increase in power consumption.

Variable speed drives have the ability to reduce energy consumption by 50%, thus reducing the carbon footprint of your cooling tower. Slow start up speeds also reduce wear and tear on motors, coupling, gearboxes and fans.

CTMS is the most experienced cooling tower company in the pacific region. You can be assured that your project is in safe hands when using CTMS. CTMS has been operating since 1985 and has carried out over 50 million dollars in cooling tower work in that period.

We specialize in change over and maintenance work that requires minimal impact on the building or service and must be completed in a predetermined time line. CTMS carries out project across Australia, New Zealand and the Pacific Islands. Scope from Laundries to Power Plants.

The hardest decision is whether to replace or refurbish.

Water-cooled chillers may be replaced with air-cooled models.

Benefits to air-cooled chillers include:

Disadvantages of air-cooled systems include:

Geothermal systems make use of the fairly constant temperature of the ground. Instead of using a cooling tower, cooling water is passed through a series of long loops buried deep in the ground. The unwanted heat is passed to the soil and rocks, where it dissipates. Since this is a closed loop system, there is little or no water usage. Initially it is more expensive than conventional cooling systems, however because the ground temperature is fairly constant and relatively low, it is possible to achieve very high efficiencies. They are low noise, have almost no Legionella risk and are relatively low maintenance. However, they require drilling bores, which is impractical in built-up areas. Water source geothermal systems directly or indirectly use underground aquifers. Direct use systems draw water from the ground, pass it through a heat exchanger and return it to its source. Indirect systems use closed pipe work loops that pass through the aquifer. Indirect systems are often comparable in cost to a conventional water-cooled system.

Using ice storage and chilled water storage systems overnight can save water and considerably cut operating costs by using electricity at off-peak rates. Capital costs can also be reduced because it is not necessary to install large chillers, etc. to deal specifically with peak loads on only perhaps 10 days of the year.. These systems potentially save 15 per cent in electrical energy. Ice systems take up less space than chilled water systems. Their installation is dependent upon skilled engineering design and manufacture. For this reason they are generally used in large installations. Seek advice from qualified professionals at the design stage.

When a building is close to a large water source such as the sea, river or lake, there may be an opportunity to take advantage of the natural heat sink. Several buildings in Sydney, including the Sydney Opera House, make use of the harbour for cooling purposes. Some of the newer buildings in Melbourne’s Docklands use sea cooling. Issues to consider include the choice of metals where heat exchanges come into contact with highly corrosive seawater, macro-organisms such as mussels that can foul heat transfer equipment, and limits of chemicals such as chlorine that can be discharged to the water body. Initial costs are normally higher than a conventional water-cooled system; however this may be outweighed by overall benefits.

Liquid coolers are a similar concept to car radiators, with the cooling tower replaced by a heat exchanger and fan. This is the most basic form of liquid cooler, called a dry cooler. The cooling water is pumped through the heat exchanger and a fan forces air over it. The air picks up the heat and removes it. Because this is a closed loop system, there is little or no water use. The main disadvantage is that dry coolers suffer reduced efficiency at higher ambient temperatures. This can be overcome in several ways. The simplest is precooling the air by water sprays before it enters the dry cooler. Sprays are activated when ambient temperatures become high. A disadvantage of spray coolers is that they must be installed and operated with care to prevent the formation of scale on the surface of the dry cooler. Alternatively, pre-cooling pads have the advantage of not creating water droplets on the dry cooler surface. Provided the cooling pad systems are properly installed and operated, they present a very low Legionella risk by virtue of their operating temperature.

Another alternative is a hybrid cooler, similar in principle to the wet/dry cooling towers, except that the condenser water circuit remains closed. A section of the cooling coil surface is wet with water recirculated from a sump at times of high ambient temperature, but at other times the cooler acts as a normal dry cooler. By draining the sump at night (when the load on the cooling system is generally low, especially for air-conditioning applications) and running the cooler dry for a few hours, hybrid coolers can be Legionella-free and do not need microbial water treatment. The significant advantage over a conventional cooling tower is lower annual average water consumption. 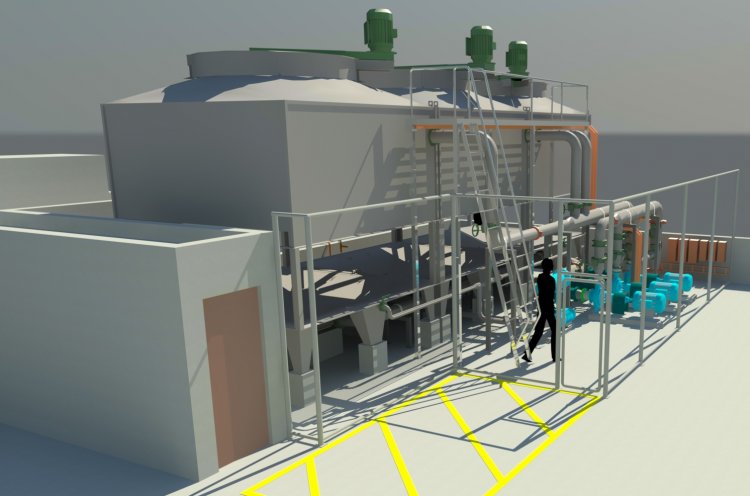 Cooling Tower Mechanical Services, one of the leading Cooling Tower and Process Cooling services companies in Australia. CTMS was established in Queensland during 1985 and has led the way, not only in improving the quality of refurbishments, replacements and new construction, though also setting the standard for others to follow with innovation and technology.

The services that are provided extend from small process and air-conditioning applications, to large scale Petrochemical and Power generation facilities. CTMS also leads the way in providing safe access platform designs for all Cooling Tower installations. Every consideration is given to the service technician and chemical technician, thus ensuring full compliance to AS3666. All persons involved with maintenance, installation or refurbishment of Cooling Towers and associated equipment should contact Cooling Tower Mechanical Services to ensure a quality run project.